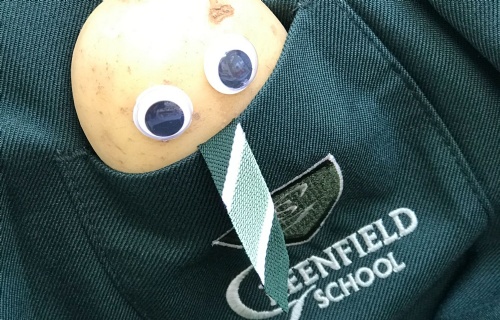 We ended this half term celebrating our Harvest Festival as a school community in a way never done before!

Usually at this time of year we host a big Harvest Festival celebration full of song, dance and poetry, all performed to a cheering crowd of parents. The Harvest Festival is a time for us to be thankful for all that we have and also to give to those who are in need of some extra support. This year looked a little different but we were able to celebrate as a community nonetheless. We have learned this year to adapt and embrace new ways of doing things and the Harvest Festival was no different!

Head Boy and Head Girl, Austin Frith and Saachi Rajani, introduced the festival by reflecting upon the difficult times which many have faced so far in 2020. They acknowledged that it is more important than ever to be grateful for all we have, and give thanks to the people who help to keep us fed, fit and healthy.

Despite the fact that half of the country struggled to purchase toilet roll for months, many of us ate our way through lockdown and lots of people even had time to perfect their baking skills (if they could find eggs and flour, that is)! But as we know, many in our close community and beyond have not had an easy time. Greenfield were delighted to support Sythwood School’s food bank in the Summer, and also to initiate a collection as part of the Harvest Festival.

Upon arrival to school, children brought in non-perishable food items and toiletries to be donated to the Salvation Army who will be distributing the items to local foodbanks. This is something which has been the driving force of our Harvest Festivals in the past and the Greenfield community felt it was more important than ever to continue this year as so many have struggled these past few months.

For this year’s Harvest Festival, children from every year group worked hard to put together different performances all themed around Autumn and Harvest. From bake offs and sambas to gardening and poetry, the performance did not disappoint. Reflecting upon this year’s Harvest Festival, Saachi says: “It has been a challenge this term to celebrate without the use of singing but in true Greenfield style, we have adapted and conquered.”

On Wednesday, children in Pre-Prep (Owls to Year 2) took centre stage and showed all of their parents how hard they have been working.

Owls and Robins told us about all of their favourite foods, from cucumbers and apples to spaghetti bolognese, chips and cereal! They even drew pictures to accompany their words.

In Reception, the children have been thinking about what seeds need to enable them to grow into big strong plants which are ready for harvesting. This week they learned a poem called “Little Seed” which helped them to understand all of the things plants need including sunlight, water and lots of care. The children also planted their own seeds in little pots to take home so that they can put their learning into action. For their Harvest Festival performance, Reception children performed their poem along with some actions and also showcased their planted seeds. 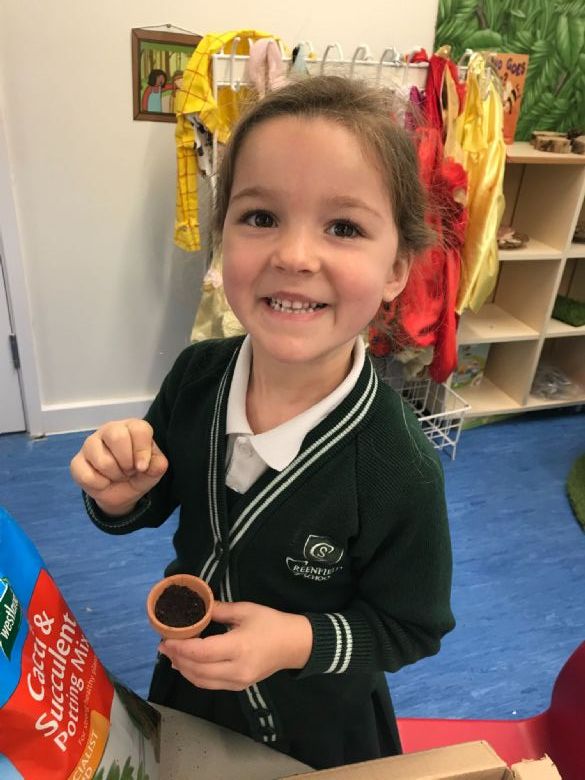 Children in Year 1 performed the Greenfield Way along with some helpful vegetables. The children dressed potatoes as Greenfield pupils and used them to teach everyone at the Harvest Festival about the things which we promote at Greenfield. This includes honesty, forgiveness, respect, kindness, sharing, listening and doing our best to be our best selves. 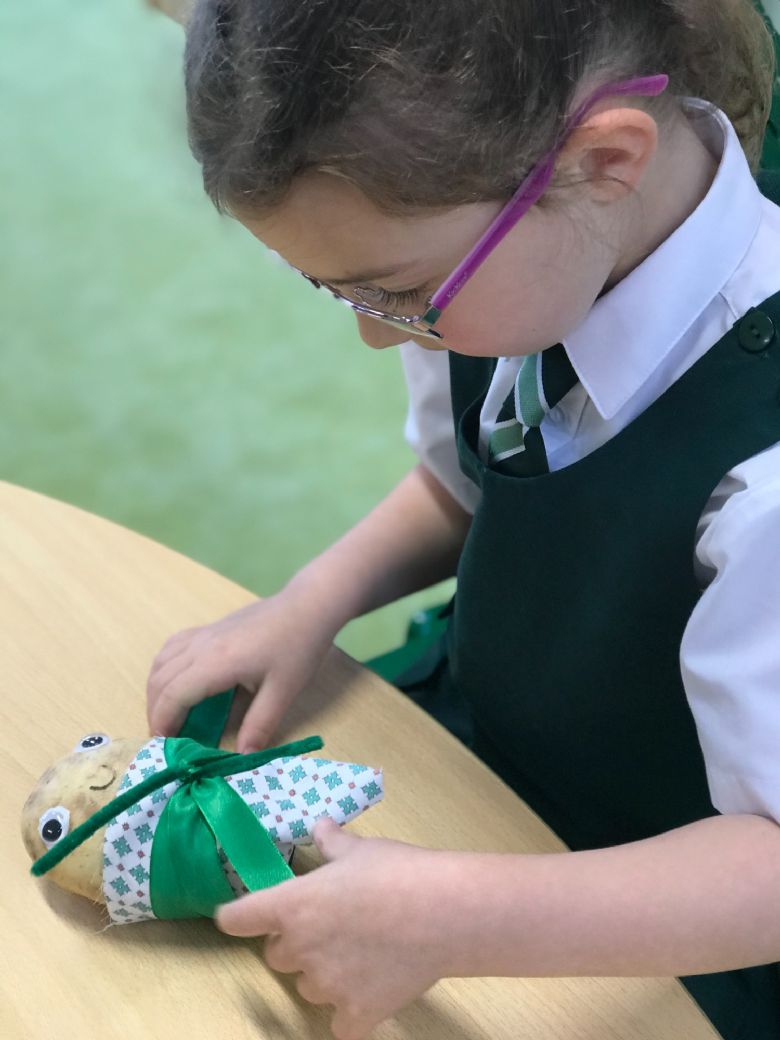 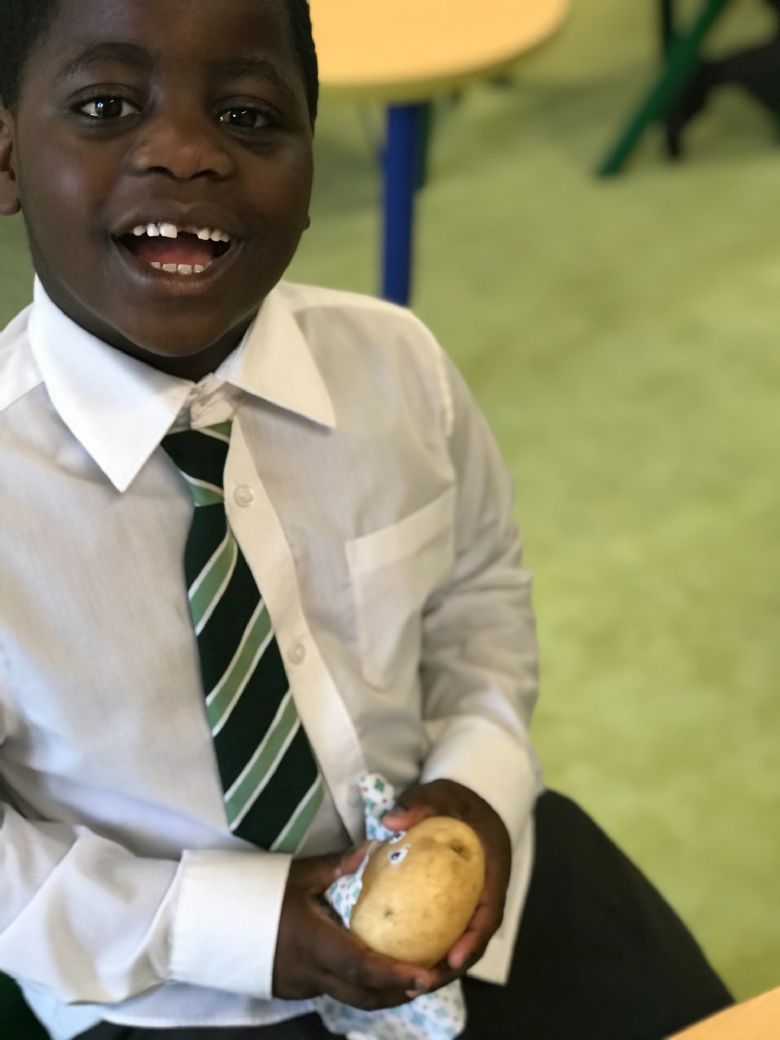 The Harvest Festival wouldn’t be the same without some music and although we can’t sing like we usually do, Year 2 treated us to a Harvest samba. The children in Year 2 have been learning about rhythm in music this term and so they put their skills to the test in a big performance complete with drums and tambourines. What a perfect close to the Prep-Prep Harvest Festival!

On Thursday, children in Years 3 to 6 had their moment in the spotlight, sharing all of their hard work in preparation for Harvest. Year 3 opened the performance with a very special episode of Gardeners’ World, in which they showcased the Greenfield gardens. They started with a step-by-step guide on how to grow cress, including how much soil to use, where to put it so that it grows best and what you can use it for, like putting it in an egg sandwich or a salad! They followed this with a tour of the Greenfield herb garden, pointing out plants such as dill, mushroom, basil and chives and telling us what they are used for.

The Gardeners’ World finale took place in the Forest School, where the children gave us a tour, taking in the key sights of the teepee, the throne and a hedgehog house. They explained all of their favourite things about being in the forest such as looking for bugs, making dens, playing on the logs and having fun in wildlife. Several children also reflected upon how peaceful they feel when in the forest school and how they love being surrounded by greenery. 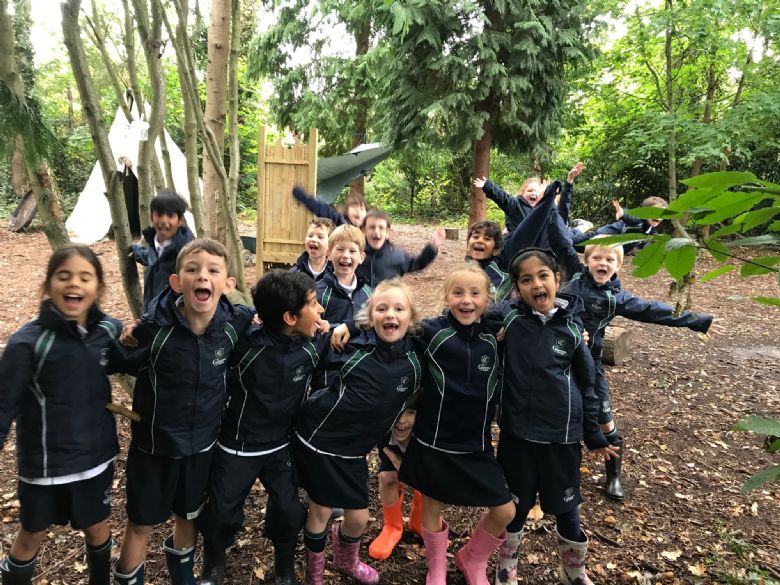 Year 4 have been thinking about all of the different stages which are necessary for our food to reach us. They reflected upon the hard work of farmers and all of the people in between who enable us to access and eat delicious food. To help them explain the process, they performed a poem to thank all of the people and animals who play a part in the process; from farmers, warehouse workers and delivery drivers to cows and chickens, and also not forgetting parents and our fantastic school chefs!

Full of budding actors and actresses, Year 5 hosted several creative gameshows themed around Harvest. With each gameshow including a host and contestants, they included ideas such as guessing global problems from a dramatic scene, distinguishing Fairtrade foods from others and trying to identify fruit and vegetables by touch.

Children in Year 6 took part in a Great Greenfield Bake Off, hosted by Mr Brown and judged by our very own Chef Mr Kerr. The brief was to produce a sponge cake with a seasonal theme and points would be deducted for any soggy bottoms! The children worked very hard to make sure their cakes included flavours which would compliment each other, as well as looking presentable and following the theme. 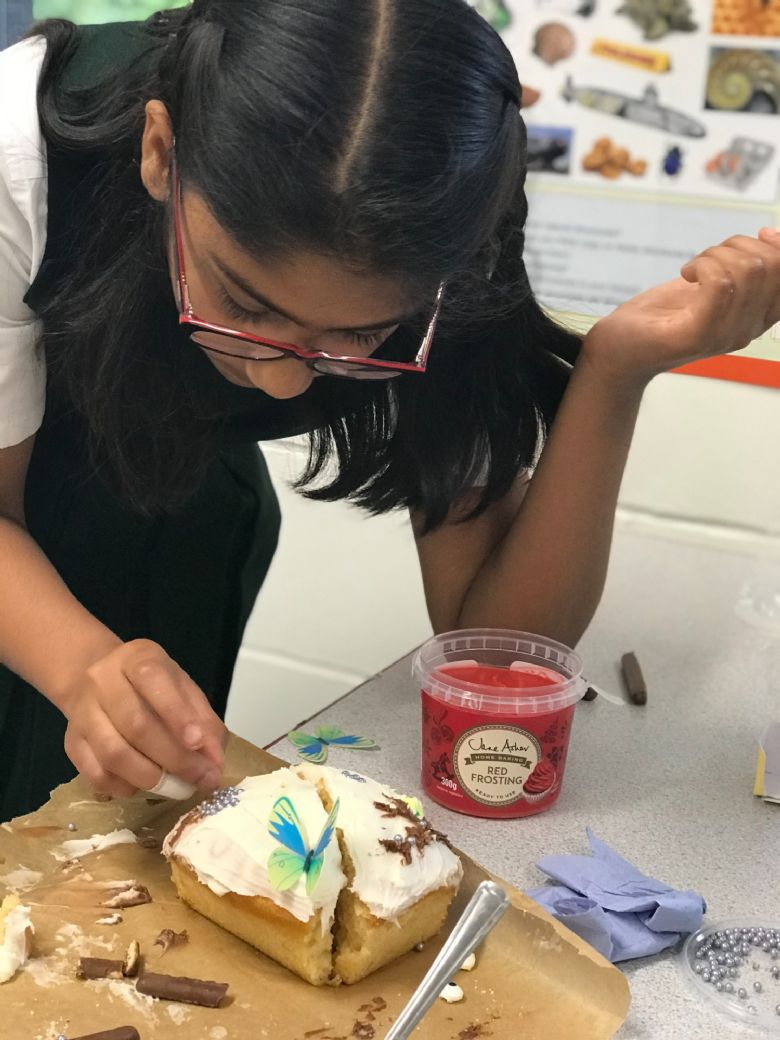 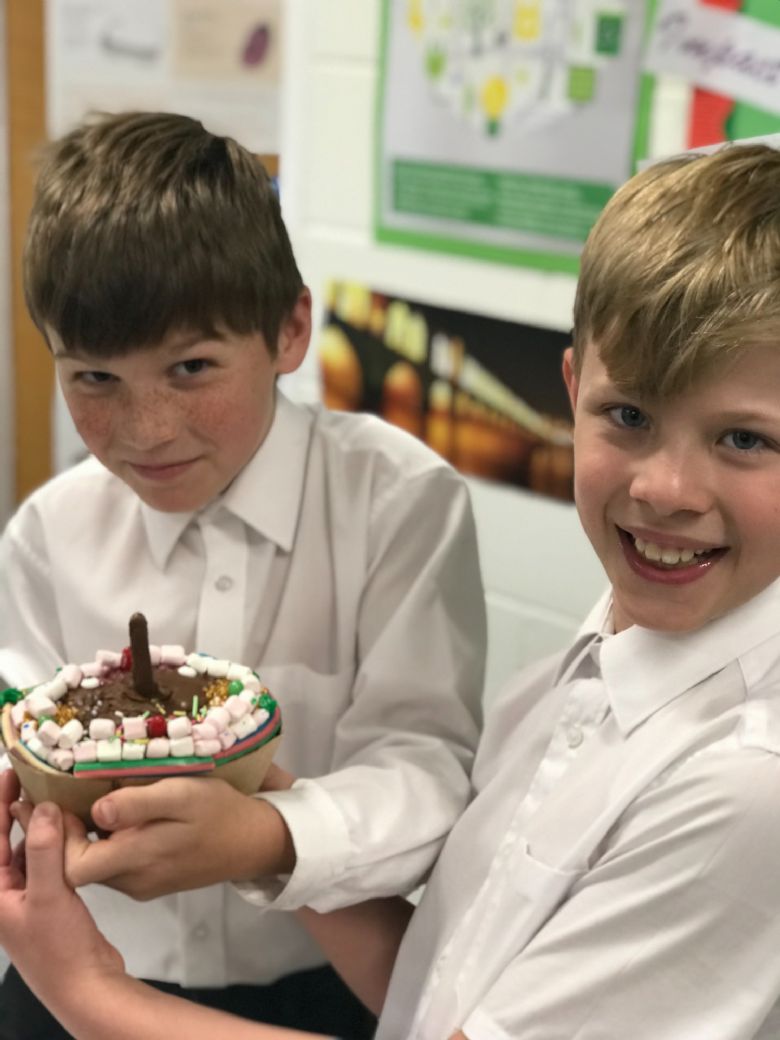 Amongst Mr Brown’s puns there were some excellent entries, from Autumn cakes with pumpkins and gold leaves to Spring-themed creations complete with marshmallows and hundreds and thousands. 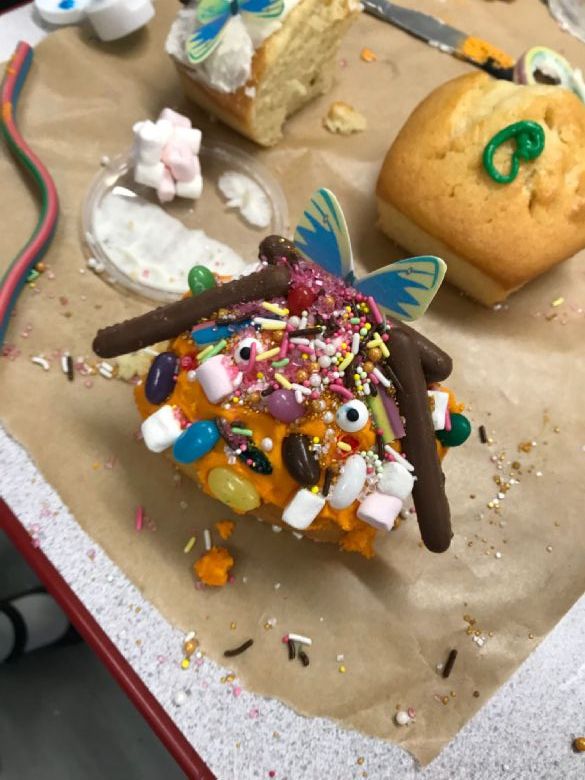 The wooden spoon was awarded to Tyler, who graciously accepted the award as his cake had turned into a smashed pumpkin when he accidentally dropped it on the floor. Well done to Sanika who won 3rd place, Saachi who came 2nd and Kayla and Lexie who were crowned Star Bakers with their farm themed creation.

Harvest Festival was once again a successful occasion and we look forward to celebrating more things as a community throughout this academic year. A huge thank you to all of the children for your hard work and also to Mrs Reeve who filmed and edited all of the footage. It has certainly been a busy half term so far and we think the children (and teachers!) are very deserving of a break. See you in November everyone!