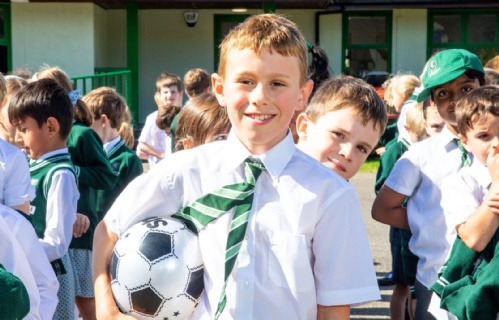 When children reach Year 6 at Greenfield, a number of positions of responsibility are assigned: from our Head Boy and Head Girl, Library Prefects, House Captains, Performing Arts Captains and more.

Introducing this year’s Sports Captain - Charlie Wade. Dedicated to a life of varied sporting activity, Charlie’s commitment and enthusiasm is an inspiration to his peers at Greenfield.

Since age 5, Charlie has been a gymnast at Prime Acrobatics.  Currently at Level 1 – their fourth highest level in their skill ranking – Charlie is aiming to bound through their Bronze, Silver and Gold levels in due course.

Four times a week, Charlie trains at Woking Swimming Club where he is a member of their Competition Squad, at Bronze Level. With most sessions lasting up to an hour and a half, Charlie typically swims 3km per session; sometimes up to 15km per week! His continuous training pays off during the club races he takes part in, where he typically finishes in the top 3 amongst his age group.

One of Charlie’s key sporting highlights came through his pursuits in rugby in 2019. Practising rugby regularly with Chobham RFC, Charlie was fortunate enough to play in a 6 a-side demonstration game at Twickenham stadium in front of a capacity crowd, building his experience in an exhilarating and different competitive environment.

As well as the aforementioned clubs that Charlie participates in, Charlie also loves football and plays regularly for Greenfield’s U11 A team for school fixtures. In Woking Park, Charlie often trains his tennis technique at Tiger Tennis. In addition, Charlie also practises skiing and has become a confident skier of red runs.

With his persistent enthusiasm and positive approach to sporting achievements, Charlie is an excellent role model for sporting achievements and perseverance – an ideal candidate for our Sports Captain. Having a drive to succeed, Charlie undoubtedly approaches his endeavours with determination and effort – moreover, he is always keen to share his knowledge and passion with his peers and teammates to boost team morale. Outside of his sporting ventures, Charlie like to practise musical instruments; playing bass guitar, drums and classical double bass.

For his next sporting challenge, Charlie has entered the Schools Biathlon SE championships on the 8th January in Aldershot. For this feat, he will need to swim 50m, then run 800m. We wish him the very best of luck!

Feeling inspired? The Biathlon is open for all children and is a great way to try something new in a competitive and fun atmosphere whilst staying active. Click here to find out how to join in!

Assistant Head, Head of Upper School and Head of PE