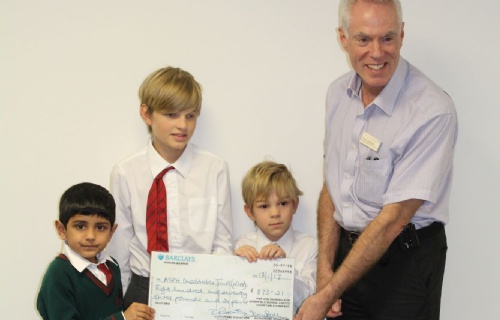 Three Greenfield pupils visit St Peter's Hospital in Chertsey to deliver a donation of more than £800, raised by pupils and parents last term.

As you may have read in one of our earlier new features, Greenfield pupils elected to support the Little Roo Neonatal Fund (previously the Early Births Fund) at St Peter's Hospital with charity fundraising this year. Today, Friday 13th January 2017, three pupils visited the Neonatal Unit at the hospital to deliver a cheque for £873.21!

The money was raised during a mufti day in the Autumn Term, where pupils had the opportunity to wear their own clothes to school for the day. Later this year, the School Council will reinstate Ice Cream Fridays and will sell ice-cool treats outside school on the Friday of each week during the Summer Term. They hope to return to St Peter's Hospital with another cheque later in the year.

About The Little Roo Neonatal Fund

The fund was set up by a team of doctors, nurses, parents and support staff in 2003 with the specific aim of supporting the babies, families and staff on the Neonatal Care Unit at St Peter’s Hospital, Chertsey. The Care Unit provides the highest level of intensive care for the smallest and sickest new-born babies in Surrey. Nearly 700 babies were cared for last year and we are delighted to be supporting them this year.