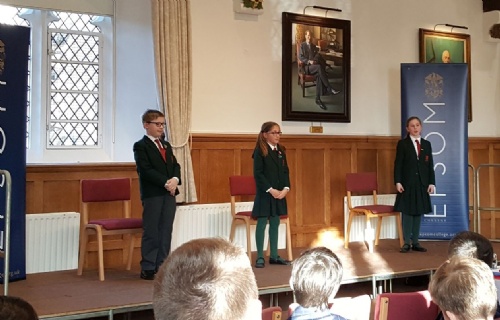 Zac, Elena and Emily did Greenfield proud this week when they spoke in the Epsom College Public Speaking Competition. Their chosen subject was ‘The History of Puns’ and it led to a very informative and entertaining presentation. Having learnt the speech off by heart, all three performed with aplomb and were unlucky not to be amongst the prize winners in what was a very even and hard-fought contest.

The History of Puns

“When I was researching for this speech my mum started annoying me with bird puns then I realised, Toucan play at that game.” This type of joke has been around for many years. Yes, you guessed it! Today we’re talking about the History of Puns.

So, what is a pun? A pun is a form of wordplay that uses two or more meanings, to create a joke.

There are different types of puns. Firstly, there are puns with a word that sounds the same as another word to create two different meanings to the joke, for example:

“You can tune a piano but you can’t tuna fish.”

Then there are puns which use words that are spelt the same but sound different. For example, we can add to the joke I just said:

These puns are normally written down, so I have had to give you the two possible meanings here.

A third type is puns which involve words which are spelt and sound the same but have different meanings. For example:

“Two silk worms had a race and ended in a tie”.

Puns have been around for a long time and probably the very first pun was not written down. However, written puns have been found in ancient Egypt, Sumeria, China and Japan. Unfortunately, we don’t have an example that translates from the ancient cuneiform or hieroglyphs. By the way, what is a hieroglyph? It’s larger than a lower-glyph.

We do know Jesus was using puns. The word Peter also meant rock, so Jesus was making a wordplay when he said:

“You are Peter, and on this rock I will build my Church.”

The Romans were fond of a good pun too. An easy Latin pun to understand was made by Pope Gregory I. He made the first pun about the English – the Angles as they were called, comparing them to angels because of their fair complexion and blond hair.

Chaucer’s Canterbury Tales contains puns and William Shakespeare liked to pun too. Shakespeare’s plays are meant to contain over 3000 puns and he also invented the most well-known pun-delivery system – the knock knock joke – in Macbeth.

Puns are used in the modern day in newspapers, like the Sun, and magazines like Private Eye which often use them on their front cover. They have also become popular for the names of businesses, such as fish and chip shops called “the codfather”, or the less pleasant ‘Frying Nemo.’

They are also popular in comedy films, such as the famous dialogue in Airplane:

“Surely you can’t be serious?”

“I am serious, and don’t call me Shirley!”

Finally, they have been heavily used by modern comedians, such as Tommy Cooper in the 1970s:

“I said to the gym instructor ‘can you teach me to do the splits?’. He said ‘how flexible are you?’. I said ‘I can’t make Tuesdays’

and the famous comedy duo the two Ronnies in the 1970s:

“The prime minister held a meeting with the cabinet today. He also spoke to the bookcase and argued with the chest of drawers.”

Recently they have tended to win the best joke at the Edinburgh Festival, such as Tim Vine’s pun:

“I’ve just been on a once in a lifetime holiday. I’ll tell you what, never again”

But I think it would be nice to end where it all began, back, in Egypt, with three Egyptian puns:

What did the pharaoh say when he saw the pyramid? Mummy’s home!

What do you get in a five-star pyramid? A tomb with a view!

What do you do when you arrive at an Egyptian home? Toot-an-come-in!

All that remains is to say Shuckran (pronounced shou-kran). That’s thank you in Egyptian. I will have to remember that if I ever open a shoe shop in Cairo.