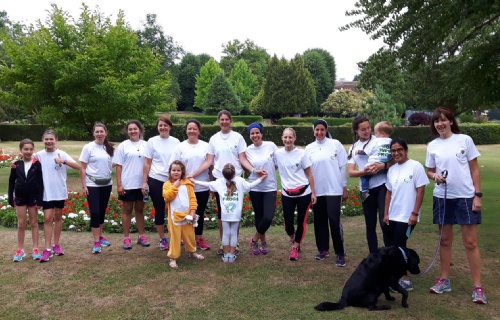 Last term, Greenfield mum Zoe Phillips started Jog with FroGS to encourage her fellow parents to get moving and raise funds for the school all at the same time.

A group of mums from Greenfield School have been pounding the pavement in the name of healthy living, whilst raising funds for the school.

Greenfield parent and qualified running instructor, Zoe Phillips, founded the “Jog with FroGS” club in April 2017 and her first group of mums managed their 5k run at the Woking Park Run on Saturday 1st July.

The first intake trained for 10 weeks, from April to July, and went from running for just 1 minute to 30 minutes by the end of the course. They followed a plan of one weekly session together and each runner completed two homework runs.

Mrs Phillips said, “Some of the members had never jogged before and so the sense of achievement at completing the 5k was huge; plus new friendships have been formed and they are now asking how to improve further! It has been an amazing experience all-round.”

When the children return to school in early September, Mrs Phillips will be running two groups; one for any new beginners who want to go from the couch to 5k in 10 weeks, and an intermediate group for those who want to progress with their running. The next beginners course starts on Wednesday 13th September and the improvers course starts on Friday 15th September; the aim being to complete the Woking Park Run on Saturday 25th November.

The 10 week course costs just £40 with 100% of the proceeds going to FroGS. The Friends of Greenfield School, known as FroGS, host lots of fundraising events throughout the school year and play a vital role in the communication between home and school. The money raised by FroGS is used to fund or partially fund equipment, facilities and initiatives at the school. By joining Jog with FroGS you can feel good and do good all in one go!

If you would like to sign up for one of the new courses you can get in touch with Mrs Phillips via the school office. Mrs Phillips is fully qualified (Leadership in Running Fitness) with a UKA Coach License and insured via British Athletics, plus DBS checked, so you will be in excellent hands!

If jogging just isn’t for you, remember that Jog with FroGS aim to be at the Woking Park Run on 25th November so make sure you look out for them and cheer them on!