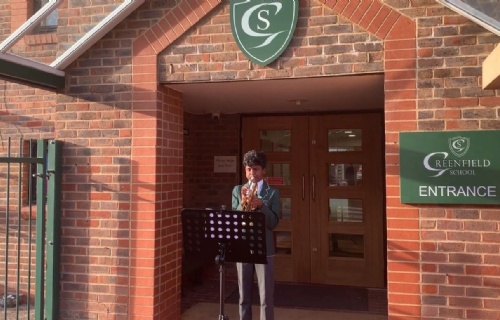 In the week of Wednesday 11th November, Greenfield pupils across the school engaged in creative, artistic and musical endeavours in honour of Remembrance Day. We have been incredibly proud of not only the talents on display, but the maturity and thoughtfulness shown throughout this week.

Last year, children from Reception and Years 1 to 6 put on an outstanding show, “Greenfield Remembers”, which commemorated 100 years since the end of the First World War. After diligent rehearsals and a lot of hard work from pupils and teachers alike, families were invited to watch their performance  at the Electric Theatre in Guildford. The children delivered a production heavy with emotion and reverence as they performed in song, dance, drama and poetry. 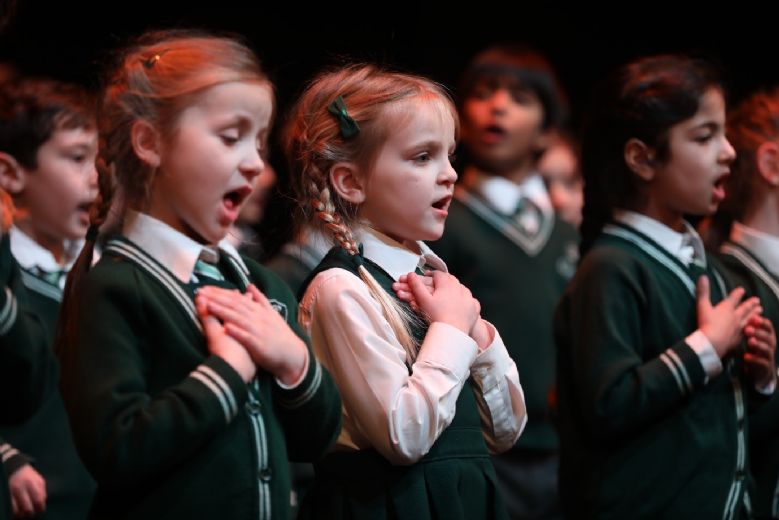 Whilst Greenfield has been persistent this year in keeping schooling as rich as possible for pupils during COVID-19 restrictions, a performance similar to this was simply not an option. Nevertheless, with the year groups in their “bubbles”, they have enjoyed taking part in a multitude of smaller commemorative presentations and engaging activities, as well as individual endeavours.

On Wednesday, Headmistress Mrs Botting led a moving Remembrance Day assembly, highlighting stories of hope, as well as sacrifice. The theme of hope was emphasised in particular to the children, as a reminder of all that we can look forward to, even though we are in the midst of a second COVID-19 pandemic lockdown. Encouraged by stories of hardship and perseverance, the children considered the shared gratitude felt for those who fought for us, whilst finding inspiration in the idea of patience and fortitude through tough times.

Deputy Head Mr Brown told a touching story through the eyes of Jack, a boy whose mother had to leave for the war and the array of emotions felt throughout the wartime. Whilst accentuating the often-overlooked sacrifices made by women during the war, the children could relate to the similarly aged narrating voice of Jack through his feelings of sadness, fear and hope.

Mr  Gudgeon, Assistant Head, gave a meaningful talk on animals of war, and the importance of remembering their sacrifice too on Remembrance Day. From not only horses and dogs used for military exploits, the children listening could also relate to needing to keep animals for companionship and morale.

The children also watched the BBC publication, ‘Poppies’ which tells the story of wartime hardships and dawning hope, through the eyes of a rabbit. The BAFTA-winning short animation engaged even the youngest children to quietly focus for two minutes, whilst the older children were more aware of the context and deeper meaning of the film. 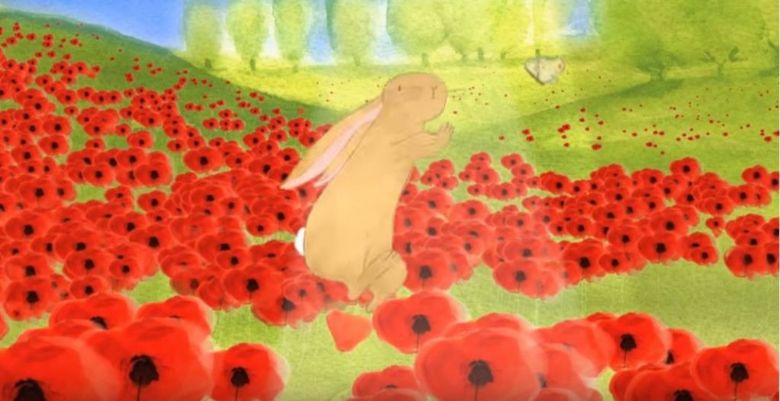 Although the assembly was held via Zoom, with children watching from their classrooms to stay in their year group bubbles, there remained an interactive element to the service. Towards the end, each group stood and recited ‘In Flanders Fields’ in unison, followed by a minute’s silence to quietly reflect on the morning’s service, in particular the gratitude for those who gave their lives for us. Watch 4C’s recital by clicking here. 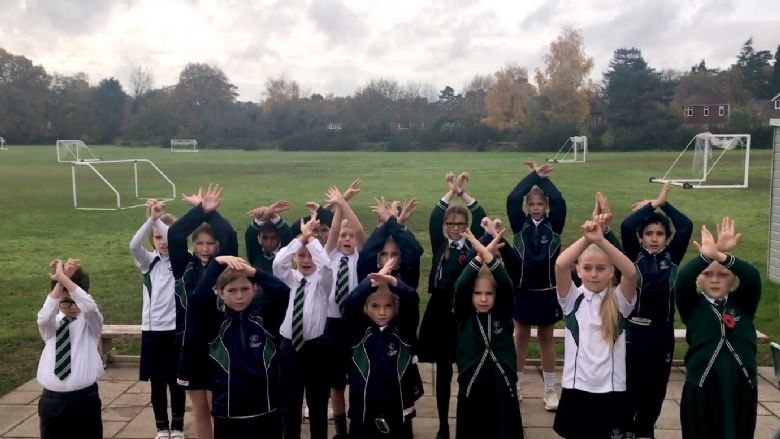 To round off the assembly, one of our talented Year 6 musicians played a beautiful trumpet solo of Last Post, which could be heard throughout the school – even the construction workers on site had to stop in awe. Enjoy the video by clicking here. 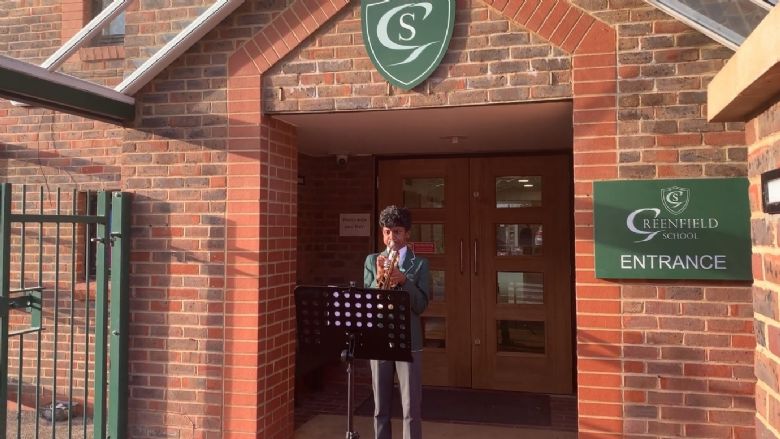 Artistic creations have always been a valued outlet at Greenfield to celebrate a cause, and Remembrance Day is no exception. From our youngest pupils in Owls to the oldest in Year 6, every child took part in a creative endeavour to commemorate Poppy Day; to be proudly displayed on the walls of the school.

The Owls and Robins  (rising 3 and 4) had the underside of their hands painted red to make some bold hand-stamped poppies. 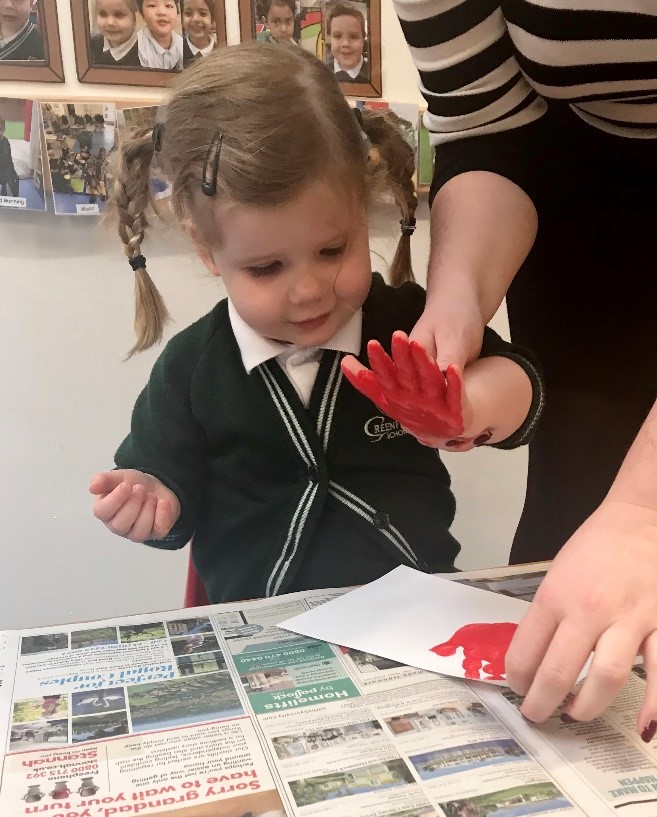 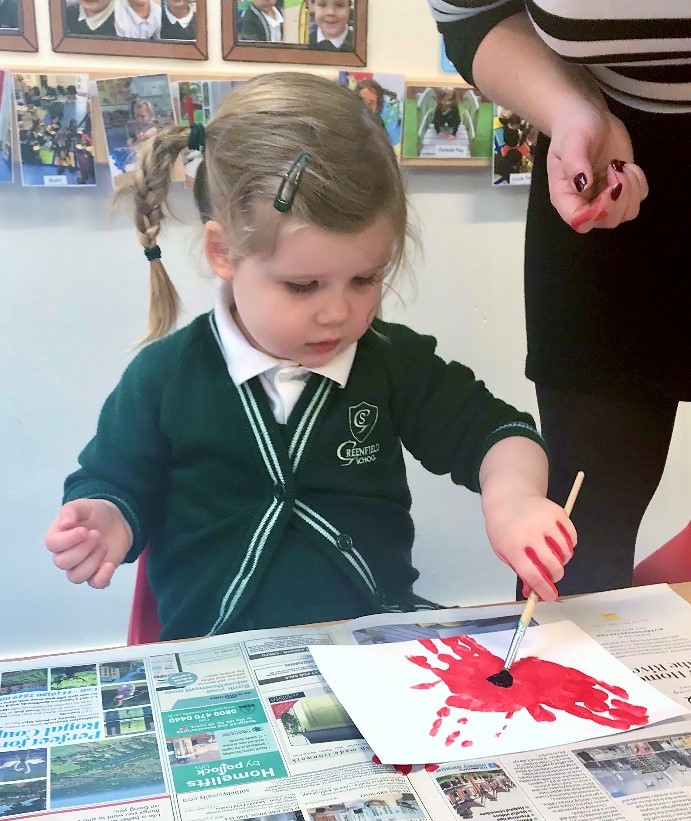 The younger children also enjoyed contributing to a bright artistic mural on the glass door to their playground, where you can see below the final poppy being added to the piece. 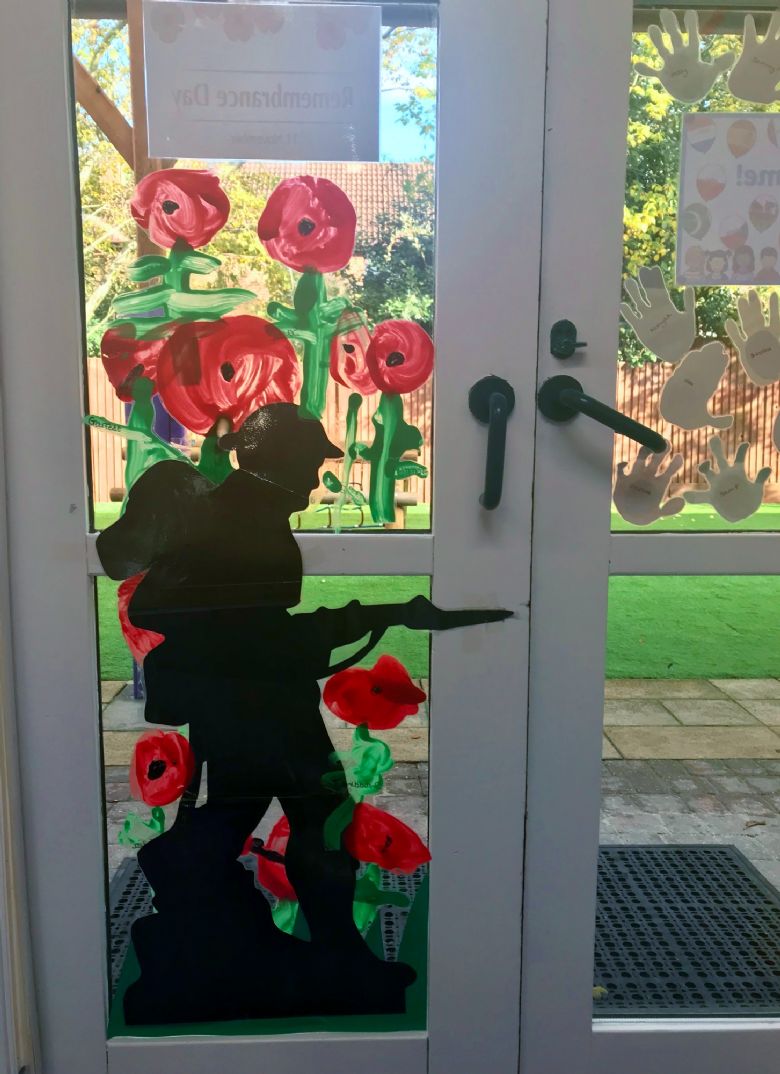 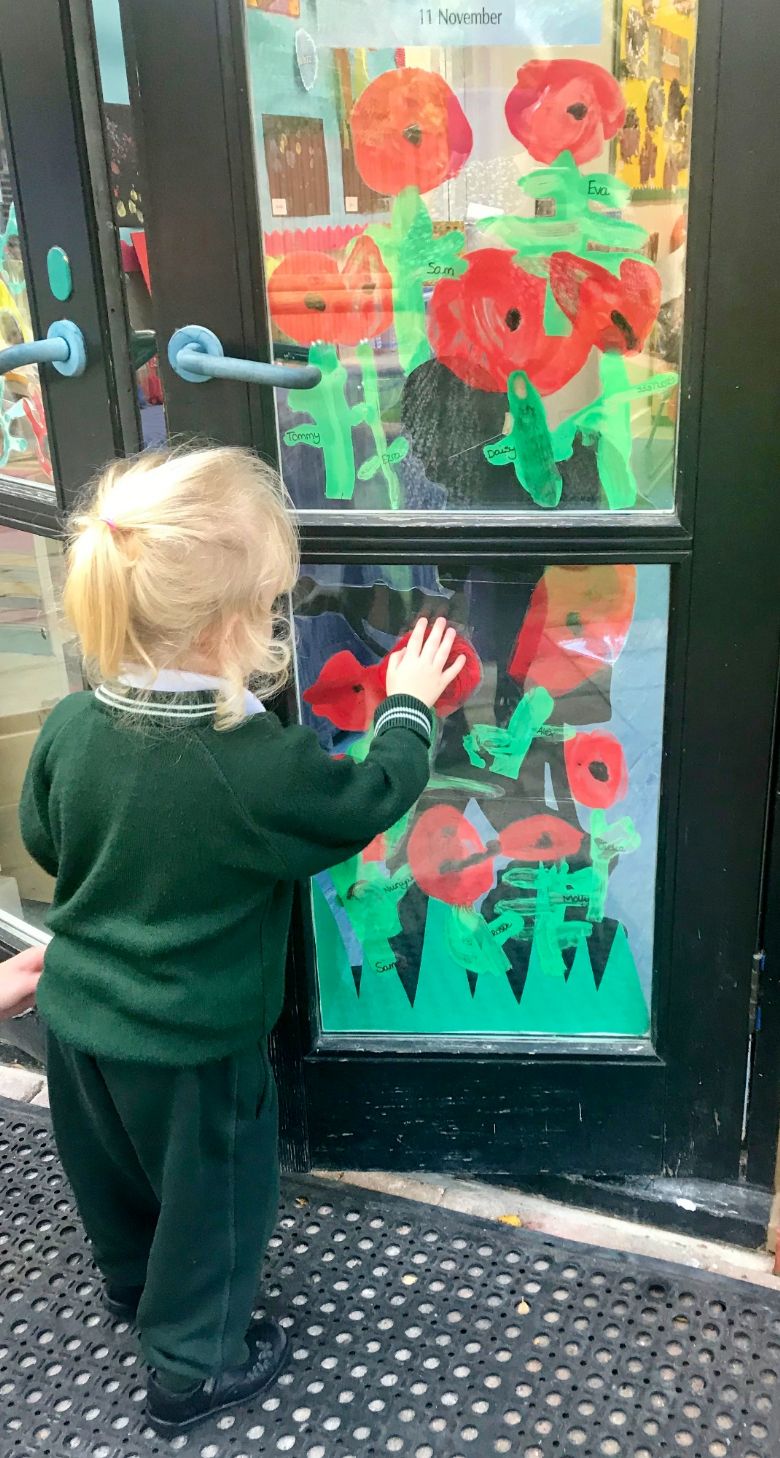 Whilst our usual practice of hosting House Meetings once a month cannot go ahead due to mixing their year bubbles, each year still participates in House activities to foster camaraderie between different groups of children. This Friday, their collaborative activity involved creating giant poppy murals.

Various literature has been highlighted in our Atrium library to assist with the children’s learning on The First and Second World Wars; for example, In Flanders Fields and the poems of Siegfried Sassoon. These have been emphasised as part of a larger display in the atrium, which provides a detailed overview of Remembrance Day and its key facts, for children to peruse as they pass through.

We have always enjoyed a strong partnership between parents and teachers, which was only emphasised during lockdown as teachers enjoyed receiving photographs and messages of the children’s achievements alongside their virtual learning. Although we are back to school now, we still enjoy receiving these updates – and were delighted to receive the below photograph of poppy fields during the war from George in Reception. 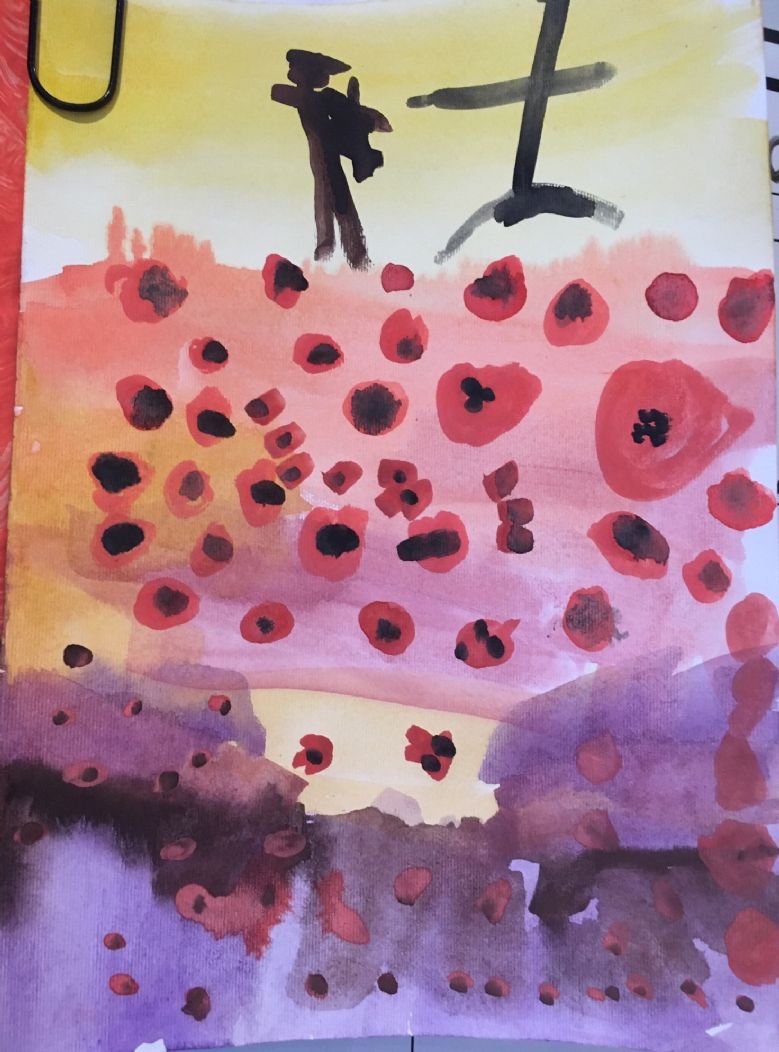 We are very proud of all of our pupils who have been  involved in honouring Remembrance Day; despite the struggle we have been through this year, Greenfield will always be grateful for the sacrifices and bravery made for us.